Move Over HIMARS, Russian Fighters Call US GPS Guided Shell The ‘Most Dangerous’ Weapon For Ukraine

Earlier this month, the US announced a whopping $3.75 billion military aid package for Ukraine, including several advanced weapon systems like the Bradley Infantry Fighting Vehicles and Sea Sparrow missiles that have never been sent to Kyiv before.

In addition to the mammoth military aid, Washington has been considering sending the cutting-edge Stryker armored vehicles and lobbying with its German counterparts to get Berlin to free its Leopard-2 tanks for Ukraine.

However, despite being game-changing equipment, they don’t scare the Donetsk People’s Republic Militia (DPR) as much as American-guided artillery shells.

The DPR Militia told Russian state news agency TASS that the M982 Excalibur guided artillery shells are potentially the most dangerous part of the US military assistance to Ukraine and must be destroyed while still in warehouses.

“This is probably the most dangerous part of the delivery. These munitions are equipped with a seeker and can adjust their flight path upon approaching the target. They are GPS-and intertidal-guided,” DPR People’s Militia spokesperson said.

“There can be only one countermeasure – effective counter-battery activities, with strikes at warehouses where those munitions are stored and vehicles transporting them to launchers. They must be prevented from ever being delivered to firing positions,” he added.

This is especially noteworthy as the DPR also told TASS that US-made Stryker armored vehicles are “nothing special,” and their supplies to pro-Kyiv forces merely serve to highlight the fact that Ukraine’s armed forces are running low on armored vehicles.

The statement from the DPR militia chief comes at a time when intense combat is taking place in the Donetsk region in Eastern Ukraine. Ukrainian President Volodymyr Zelensky said on January 13 that the “enemy” had focused their largest forces in this direction.

The Pentagon announced on January 6 that the $3.5 billion package would include over 500 M982 Excalibur GPS-guided artillery shells. The shells started to arrive in Ukraine and have since wreaked havoc on Russian and DPR forces.

Excalibur has been essential to Ukraine’s counteroffensive operations. With pinpoint accuracy, a single guided howitzer shell can fully destroy a target, such as a tank, a bunker, or a supply depot.

Even though the military aid package includes lethal equipment like Bradleys, M113 Armored Personnel Carriers, M109 Paladin self-propelled howitzers, M119 105mm Howitzers, RIM-7 anti-air missiles, and Zuni aircraft rockets, the DPR’s focus on M982 Excalibur may be seen as a vindication of its precision and lethality.

The Terror Of M982 Excalibur

It may be pertinent to note that artillery has been a major factor in the war in Ukraine and the most consistent form of assault by both combatants.

At one point in the ongoing conflict, around 20,000 artillery rounds a day were being used by the Russian military in Donbas. In contrast, the Ukrainians often defended their positions and fired back at the Russians with about 6,000 rounds per day.

The M-777 155mm Howitzer and other 155mm artillery weapons can fire the M982 Excalibur bullet. Besides the US, the UK and other European countries have also delivered their respective howitzers to Kyiv.

As for the M982 Excalibur, the development of this weapon was a joint effort between BAE Systems and Raytheon. BAE Systems makes the body, base, and payload, and Raytheon supplies the guidance systems.

In 2004, the development work was combined with a Swedish-US program to create a guided artillery munition.

Excalibur’s first firing experiments from the M777 lightweight field howitzer took place in 2003. The Excalibur is a GPS-enabled artillery shell that can hit a target within 250–500 feet. It is typically used for close support fire missions since friendly forces are present or there is a high risk of collateral damage to civilians or civilian infrastructure.

After launch, the fins extend, enabling it to alter its trajectory and land at the designated target. Naturally, the Ukrainian forces’ firepower may be significantly increased by the M982 Excalibur, and it also makes it possible for them to launch precise strikes to take out important Russian objectives. 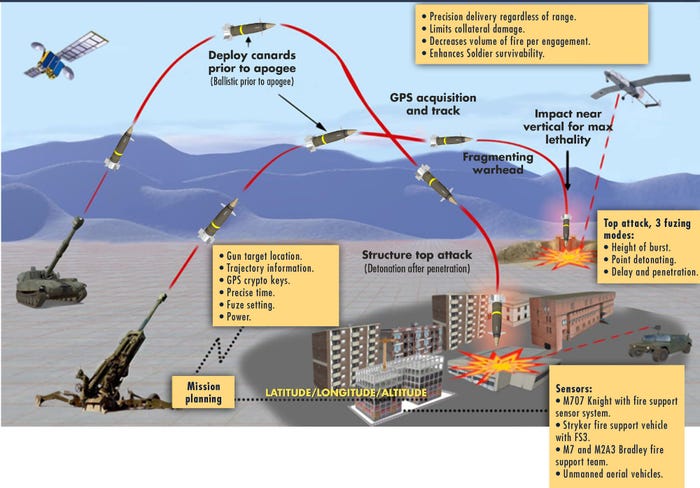 With the help of an integrated, jam-resistant GPS receiver, the Excalibur projectile updates the inertial navigation system, providing accurate in-flight guidance and dramatically raising accuracy to less than two meters.

With its three fuze options—point-detonation, point-detonation delay, and height-of-burst—the Excalibur projectile can be deployed in any weather or terrain. The US Army claims that Excalibur can engage targets with first-round effects-on-target while reducing collateral damage and the number of rounds required to engage targets.

Now that the Ukrainian troops have pushed back and are situated closer to the Russian and DPR troops after retaking some regions last month and launching a counteroffensive, the possibility of high-value Russian targets being hit by Excalibur is very high.

This may be the DPR militia’s motivation for destroying the shells in the warehouse before they could even be deployed against the invading troops.

Spy Balloon Or Venus? When US...

Su-75 ‘Checkmate’: Russia Could Invite India To Join The...

Spy Balloon Or Venus? When US Navy Tried Shooting...

US Navy divers are currently trying to recover the remains of the Chinese spy balloon that was shot down off the coast of South Carolina.
Keep reading
Air

Russian air force fighters are set to get ‘smarter’ with the introduction of what appears to be an Artificial Intelligence (AI)-enabled data linking and sensor fusion system that connects a pair of jets in a networked operation.
Keep reading
Naval

Taiwan Is Deploying ‘Cheap’ Minelayers & Their Mines With...

Many in Taiwan and their supporters in the strategic community in the United States seem to favor applying one lesson learned from the ongoing war in Ukraine against China to thwart its aggressive designs on the island nation. That makes the Chinese invasion very difficult and expensive by mining its warships in the Taiwan Strait.
Keep reading
Air

A US Air Force F-22 Raptor popped a Chinese “spy balloon” on February 4 using an AIM-9X Sidewinder missile, marking the first kill for the mighty Raptor. Interestingly, this wasn’t the first time the Sidewinder had destroyed a Chinese target.
Keep reading
Air

US Air Force Prepares For ‘Ultimate Clash’ With China’s...